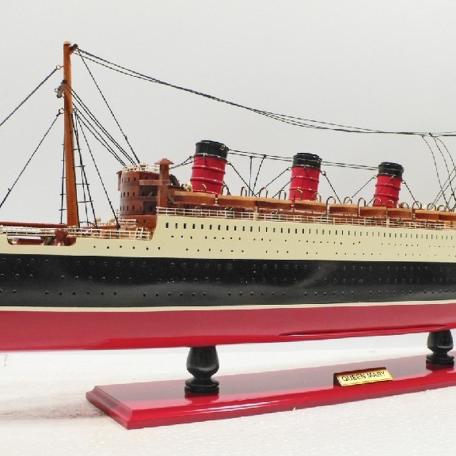 RMS Queen Mary is a retired ocean liner that sailed primarily on the North Atlantic Ocean from 1936 to 1967 for the Cunard Line (known as Cunard-White Star Line when the vessel entered service). Built by John Brown & Company in Clydebank, Scotland, Queen Mary along with her running mate, the RMS Queen Elizabeth, were built as part of Cunard’s planned two-ship weekly express service between Southampton, Cherbourg, and New York City. The two ships were a British response to the superliners built by German and French companies in the late 1920s and early 1930s. Queen Mary was the flagship of the Cunard Line from May 1936 until October 1946 when she was replaced in that role by Queen Elizabeth

There are no reviews yet.

Be the first to review “QUEEN MARY” Cancel reply

The Queen Mary was a modern ship. The British combination of traditionalism and modernity was considered too sterile by the some critics of the 1930s. But whatever said, the Queen Mary was a beautiful ship – inside and out. Her interiors had over fifty different woods, collected from all over the British Empire. Inside the Queen Mary’s staterooms, you could easily make out that you were on a ship. Previous liners had disguised their interiors to palaces and manor houses, but the Queen was not afraid of looking like a ship. Around the vessel nautical touches were displayed and the round portholes were proudly exposed. The first class lounge was a two deck high creation with little groups of tables and chairs cosily put together around fireplaces and in the room’s corners. But perhaps the highlight of the ship was her first class dining saloon. The long tables of the old ocean liners had been long gone, and just as in the lounge the tables were grouped with two to four chairs a each. For larger companies bigger tables were naturally available. On the short-side wall a giant map of the Atlantic was mounted. It showed the exact position of the Queen Mary during a transatlantic voyage. When Queen Elizabeth entered service after the war, you could see the position of the sister-vessel as well, and thereby knowing when they would meet on the Atlantic. The first class accommodations were vast with plenty of elbow room, all with a light touch of Art Deco, the new type of art introduced by the Île de France in 1927. One beloved feature was the small and exclusive Verandah Grill, just below the main mast. The Queen Mary had been intended to have three classes: First, Second and Third. 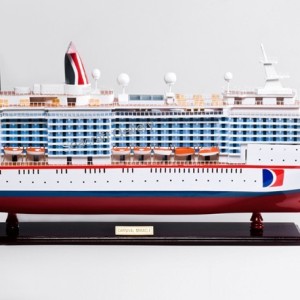 The Carnival Miracle is a Spirit class cruise ship owned and operated by Carnival Cruise Lines. It offers Western Caribbean cruises from Tampa, Florida, year round, with ports of call in Grand Cayman, Costa Maya, Mexico; Belize, and Cozumel, Mexico. Eighty percent of her stateroms have ocean views, and eighty percent of those feature private balconies. Also unique to the Carnival Miracle is an 11-story Metropolis atrium with a ruby-red glass ceiling. 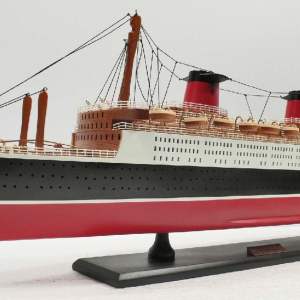 Le France II was a Compagnie Générale Transatlantique (CGT, or French Line) ocean liner, constructed by the Chantiers de l’Atlantique shipyard at Saint-Nazaire, France, and put into service in February 1962. At the time of her construction in 1960 she was the longest passenger ship ever built, a record that remained unchallenged until the construction of the 345 meter RMS Queen Mary 2 in 2004.

Le France II was later purchased by Norwegian Cruise Line (NCL) in 1979, renamed SS Norway and underwent significant modifications that better suited her for cruising duties. She was sold to be scrapped in 2006, and scrapping was completed in late 2008. 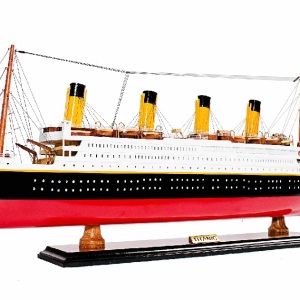 The Royal Mail Ship TITANIC was the last grand dream of the Gilded Age. It was designed to be the greatest achievement of an era of prosperity, confidence and propriety. Although no one knew it, the world was about to change drastically. Radio had been invented in 1901. The Wright Brothers’ first successful flight was in 1903. The old presumptions about class, morals, and gender-roles were about to be shattered. If the concept of Titanic was the climax of the age, then perhaps its sinking was the curtain that marked the end of the old drama, and the start of a new one.